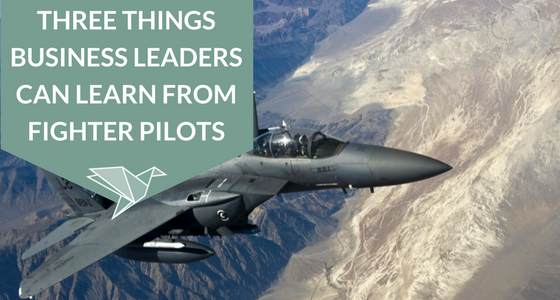 Actually, what I discovered was that the best performing teams in the world rely on one thing for their excellence.  The exceptional skills that allow them to deliver are based on each member of the team being able to give, and receive, effective feedback.

Jets and desks – the role of communication

In one way it’s no surprise. Nearly two decades in financial services before a career change into business coaching and training has shown me that transferable skills are highly prized. The very abilities I urge people to acquire for business success are almost identical to those most valued by the men and women who fly into hazardous situations on a daily basis.

What works for Top Guns?

In the fighter squadrons, de-briefs are often longer than the flight mission that preceded them and are highly valued. In the business sector we take five minutes, if that, to post mortem events and, unlike the RAF, it’s rare for significant change to result from a business post mortem.

Sharing mistakes, openly and freely, ensures that lessons are learned throughout the RAF. A genuine ‘no blame’ culture requires both honesty and effective communication. As one pilot explained, “If I covered up a mistake which was later repeated and cost lives, I could never forgive myself”. In the city it’s much more common for blame to be apportioned than lessons to be learned. As a result, people keep their heads down and try to hide their problems so they can solve them alone, with consequences ranging from personal disaster to industry-wide catastrophe.

Framing feedback in terms of how it made the recipient feel is vital. For example, “When you spoke that way during the mission it made me feel anxious” was cited as a practical example of how to build team performance, because if individuals don’t know how their actions affect others, they can’t change.

It was inspiring to discover that the model I share with my clients is identical to the one fighter pilots use to exchange feedback! Allowing individuals to develop personal strengths and teams to build capabilities requires:

If training at this level appeals to you, or if you believe your business could benefit from learning the techniques described here, contact me and let’s explore how we can bring top gun training to your business.

By Katherine Bryant, Executive Coach & Founder of The Progress Parnership

Katherine Bryant is a Consultant & Executive Coach at The Progress Partnership

This site uses Akismet to reduce spam. Learn how your comment data is processed.

Copyright 2014 The Progress Partnership Limited. All rights reserved.
Back to Top