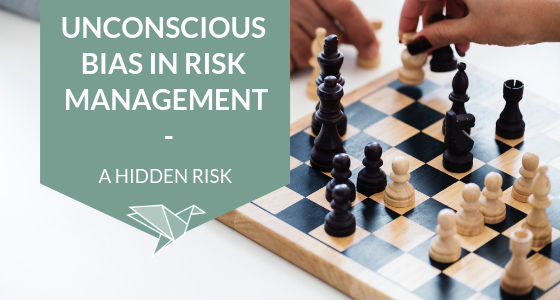 Here is the excellent (or maybe I'm baised?!) article they wrote after our discussion or you can read the published version on their website here.

Unconscious bias distorts our perception of risk and causes us to be over-reliant on initial data, to disregard information that contradicts our existing beliefs, and engage in potentially damaging group think. StratgeicRISK spoke to The Progress Partnership director, Katherine Bryant, to hear her insight into this emerging risk.

We rely on a combination of data, knowledge and experience to make critical risk decisions but whether we are aware of it or not, our brains are also relying on unconscious psychological bias.

We’ve evolved with bias, essentially as a protection mechanism and it is central to our human nature. Though it has served us relatively well throughout evolution, helping us to create communities and avoid danger; in today’s more complex world of risk management, unconscious bias is in itself, a substantial risk.

While it distorts our perception of risk, bias also causes us to be over reliant on initial data, to disregard information that contradicts our existing beliefs, and engage in potentially damaging group think.

For a profession respected for its logical, objective assessments a susceptibility to bias can be hard to accept but the scientific evidence is overwhelming. We are all the victims of bias, to some extent, in every decision we make.

Your risk decisions aren’t always rational. This natural susceptibility to bias can be hard to accept but the scientific evidence is overwhelming. We are all the victims of bias, to some extent, in every decision we make.

Even AI can’t help us

As data science evolves and new technologies augment our ability to analyse risk you’d imagine decision making would be getting more objective and accurate but we are still susceptible to bias. Not only are models created by humans (and therefore full of inherent biases) but your ability to interpret the data and the basis on which you make critical risk decisions, are still inherently flawed by human nature.

Highlighting and understanding this often-overlooked human risk factor is critical; doing so allows us to recognise where we are at risk and to translate that knowledge into effective action; to combat bias, prevent crises and to truly manage risks effectively.

How does bias impact us?

There are over 250 recorded cognitive biases that affect our judgment and decision making both consciously and unconsciously, and it is all too easy find evidence of them within our organisations.

Consider authority bias; has an over-reliance on the most senior person in the room ever meant other valuable opinions were ignored? Once a senior figure makes their position clear have you ever seen a group simply agree? Engaging in group think like this was identified by the FCA as being central to the failure of HBOS.

At Enron, overconfidence led to unsustainable risk taking that was their downfall and obvious too was sunk cost bias which causes organisations to remain on a path for too long, usually as a result of the levels of time, effort or money invested.

Availability bias leads us to overestimate the likelihood of events with greater ‘availability’ in memory (i.e. recency or severity) ahead of objectively more likely or impactful events. Think of those decisions that are made after loss events, are they always the most logical?

Anchoring distorts perceptions by assigning more weight to information and views presented early on in a process and confirmation bias can make it more difficult for individuals to then raise an alternative perspective for fear of disrupting consensus.

The question isn’t whether bias exists, but instead how you can recognise and manage it within your organisation.

5 key steps to combat bias in your organisation:

1. Raise awareness so teams recognise their susceptibility to bias in relation to risk perception and decision making

5. Embed a culture of “curious challenge” - accept conflict as healthy and be open to different approaches and methodologies.

Combating unconscious bias in risk management is critical for the accurate identification, assessment and mitigation of risk. Especially in today’s fast evolving world of risk, organisations who ignore the impact of bias do so at their peril.

Katherine Bryant is a Consultant & Executive Coach at The Progress Partnership

This site uses Akismet to reduce spam. Learn how your comment data is processed.

Copyright 2014 The Progress Partnership Limited. All rights reserved.
Back to Top